Some anti-public education state senators are pushing to advance a tuition voucher bill that could siphon more than $500 million from our public schools.

In October 2017, state Senate Education Committee members voted on Senate Bill 2, but due to a procedural issue, the bill was returned to the committee. That occurred after senators got more than 5,000 emails from PSEA members opposing SB 2. Since the beginning of the year, PSEA members have sent more than 23,000 messages to lawmakers opposing this plan.

On Dec. 12, the committee chairman, Sen. John Eichelberger, scheduled SB 2 for another committee vote but cancelled it after news broke that Senate leaders planned to replace a senator on the committee who opposed the bill with a senator who supported it. SB 2 is certain to come back for another vote in 2018.

SB 2 would redirect state education funding to non-public schools. Students who attend public schools that score in the lowest 15 percent on state math and reading standardized tests would be eligible.

“It’s extremely disappointing that state senators think voting on tuition voucher schemes should be a priority for the General Assembly,” said PSEA President Dolores McCracken. “This bill could cut more than $500 million from school districts that need state funding the most.

“For many of these school districts, the losses would end up being more than the 2011 state funding cuts that threw our public schools into crisis.” 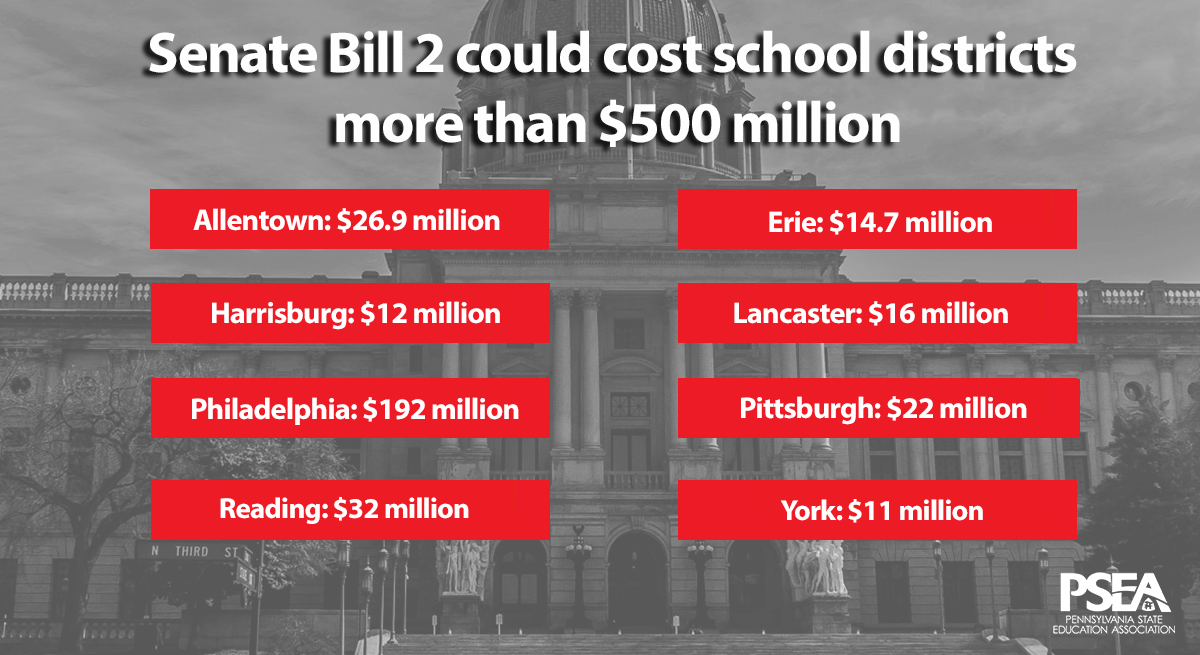 If it becomes law, the voucher bill would siphon more money from Pennsylvania's most financially needy school districts than those districts lost when lawmakers cut nearly $1 billion in state funding in 2011.

For example, a PSEA analysis shows that these school districts would lose the following state funding amounts under the voucher bill if only one-third of eligible students participated in the voucher program:

“There are good reasons why voucher bills haven’t passed for decades,” McCracken said.

“Vouchers don’t help students learn, they drain money from public schools, and they don’t hold private schools accountable for how they would spend the money.

“I hope more state senators realize this before this dangerous bill gets to the Senate floor for a vote.”

Key facts about the voucher bill include: