PSEA joins the nation to celebrate National School Nurse Day on May 9, 2018. If you think school nursing is all about flu shots, Band-Aids, and record-keeping, you haven't been inside a school lately. School nurses and school health professionals juggle a complex array of medical and social issues, seeing thousands of students, and often moving from school to school throughout the district.

School nurses come to the rescue 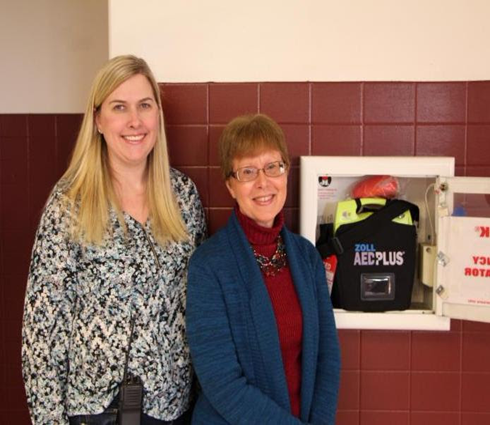 Certified school nurses do much of their work behind closed doors with the privacy of students and others a foremost responsibility.

They don’t seek the spotlight because that usually means serious trouble. But in those moments they play starring roles.

A private bus driver walked into the Avon Grove High School office to pick up a student this past January and collapsed.

A call went to Karen Flad in the nurses’ office. She rushed to the scene and radioed fellow nurse Colleen Munger, who was in another part of the building. Munger grabbed an AED – a portable electronic device connected to an individual that automatically diagnoses cardiac situations and gives instructions on if, and when, to administer shock treatment – and headed to the office.

When she arrived, Flad was with the patient, who she noticed was purple in color, and was experiencing severe breathing difficulties.

They used the AED and started CPR, while principals and others were in touch with paramedics who were enroute.

“It was organized chaos, but everybody stayed calm and worked together,” Munger said.

Flad noted there was also uncertainty about the man’s condition – whether it was a seizure or a heart attack.

“We also heard he had fallen, so we were concerned about head injuries,” Flad said. “There were a lot of possibilities we had to consider.”

But they kept him stable until medics arrived and took over.

A few weeks later they got a call from the man’s wife thanking them for what they did.

At South Eastern’s Kennard-Dale High School, a student returned for the 2017-18 school year thanks in large part to the actions of nurse June Stratmeyer.

As the previous school year was winding to a close in late May, Stratmeyer got a call from a teacher that a student collapsed in the hall during class changes.

She found him unconscious, and his breathing highly irregular. A teacher grabbed the AED, and after multiple shocks and CPR the student started breathing as medics arrived.

The student was found to have had a heart condition, and after receiving a defibrillator, was cleared to return to school in 2017-18.

Stratmeyer used the event to underscore the importance of having AEDs available and having people trained to do CPR. Three teachers who were trained in CPR assisted her with the student.

“Many think AEDSs aren’t needed for students, that cardiac events just happen with adults,” she said. “But it does happen.”

The high school had one AED when the emergency happened. It now has three – one for each floor of the building.