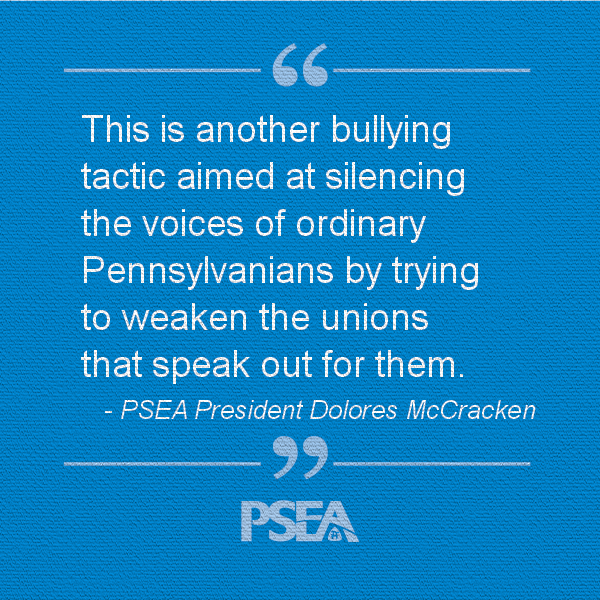 HARRISBURG (Nov. 21, 2017) – Dolores McCracken, president of the Pennsylvania State Education Association, today issued the following statement after the House State Government Committee approved a bill aimed at silencing the voices of working people and their labor unions by prohibiting public employees from voluntarily having some union dues and political action committee contributions deducted from their paychecks.

“This is another bullying tactic aimed at silencing the voices of ordinary Pennsylvanians by trying to weaken the unions that speak out for them.

“Payroll deduction costs public employers nothing, because payroll systems are automated. So, this doesn’t save the taxpayers any money - at all. It’s completely disrespectful to working people and the unions that work so hard to speak out for them.

“Bills like this one have absolutely nothing to do with good government, and they’re certainly not about ‘protecting’ anyone’s paycheck. This is part of a relentless effort by special interest groups to undermine public education, tilt the laws in favor of their powerful donors, and put corporations and the wealthy ahead of ordinary Pennsylvanians.

“Lawmakers need to get to work on issues that impact middle-class Pennsylvanians. This bill isn’t one of them, so they should vote ‘no.’”

McCracken is a paraprofessional in the Council Rock School District. An affiliate of the National Education Association, PSEA represents approximately 181,000 future, active and retired teachers and school employees, and health care workers in Pennsylvania.