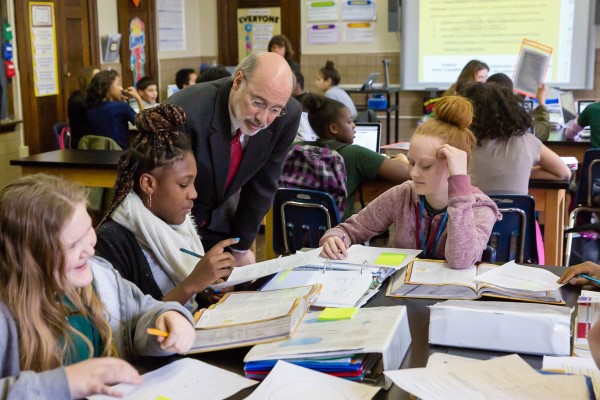 Since taking office, Gov. Wolf has worked with Democrats and Republicans to reverse school funding cuts, invest in our public schools, enact a new school funding formula, and reduce the amount of time our students spend on standardized tests.

"Over the last three years, we’ve invested in our schools and reversed the billion dollars in cuts that were made under the previous administration, cuts that led to larger class sizes, mass layoffs of educators, and cuts to programs like full-day kindergarten," Gov. Wolf said in a speech to the General Assembly.

“Gov. Wolf has made funding for Pennsylvania’s public schools his top priority, and he’s delivered," said PSEA President Dolores McCracken. "Under his leadership, school funding has increased steadily over the past three years, and our public schools have the resources to make the investments our students need to learn.”

Education funding in the budget

Learn more about the governor's career and technical education proposal.

Investments in education already paying off

In his budget speech, Gov. Wolf said the investments made in public education over the past three years were already beginning to pay off.

"Our high school graduation rate is more than 86 percent, making us a national leader," Gov. Wolf said. "We’re second in the nation in STEM education, preparing our children for the jobs of tomorrow. And we’ve increased the number of career and technical education students earning industry-recognized certificates by nearly 33 percent, preparing them for the jobs our employers are trying to fill right now."

The beginning of the process

The introduction of the governor's budget proposal marks the beginning of the state budget process. Between now and the end of June, lawmakers will review Gov. Wolf’s plan and make decisions about it. PSEA will have updates throughout the process.