It is fitting to celebrate this distinction as Pennsylvania and the nation kick off American Education Week today, PSEA president says 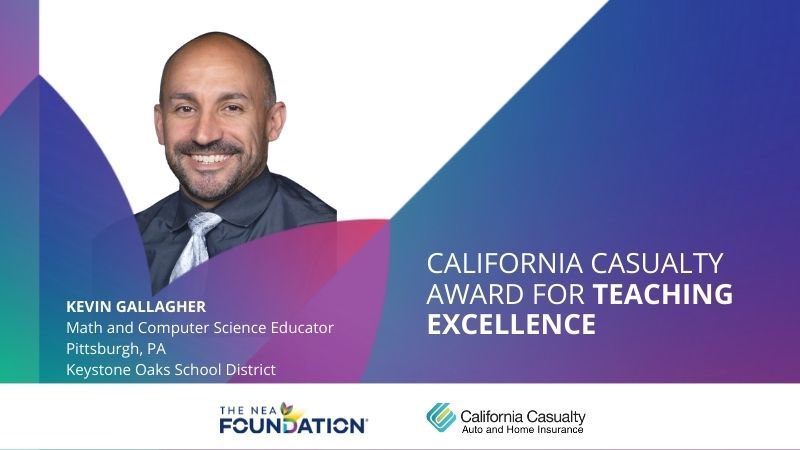 PITTSBURGH, PA (Nov. 14, 2022) – Kevin Gallagher, a math and computer science educator at Keystone Oaks High School, was recently named one of five educators nationally to receive the 2023 Horace Mann Award for Teaching Excellence. This award, presented by the NEA Foundation and sponsored by the Horace Mann Educators Foundation, is one of public education’s highest honors.

“I am honored and proud to represent educators from Keystone Oaks and Pennsylvania in being a Horace Mann Award recipient,” Gallagher said. “I would like to thank the NEA Foundation and PSEA for their support through this process.”

The Pennsylvania State Education Association (PSEA) nominated Gallagher for the award, which recognizes educators for their exceptional skill in the classroom, attention to equity and diversity, engagement of families and communities, commitment to ongoing professional development, and advocacy for the profession.

PSEA President Rich Askey said it was fitting to celebrate Gallagher’s award as Pennsylvania and the nation kick off American Education Week today, a weeklong celebration of public education, educators, students, and their families.

“PSEA is beyond proud to count Kevin Gallagher as a member,” Askey said. “Kevin inspires his students every day, helping them reach their full potential in the classroom and in life. We congratulate Kevin and all the 2023 Horace Mann Awardees for Teaching Excellence.”

In addition to Gallagher, the following educators were also recognized as 2023 awardees:

“These talented educators have connected powerfully with students, supporting them in the moment and empowering them for the future,” said Sara A. Sneed, president and CEO of The NEA Foundation. “Their educational expertise, commitment to serving students’ diverse needs, and ability to uplift their colleagues are fundamental to creating robust and inclusive learning environments for all. We thank them for their commitment to their students and the teaching profession, which is fundamental to a democratic society. We thank the Horace Mann Educators Foundation for its support in recognizing outstanding educators in such an uplifting way.”

Each 2023 honoree will receive a $10,000 award and be featured in a mini-documentary video that will premiere at the NEA Foundation Salute to Excellence in Education Gala on May 5, 2023. To learn more about the award, go to www.neafoundation.org.