For the second time in the past year, Gov. Tom Wolf has signed legislation greatly aiding career and technical education students and instructors. 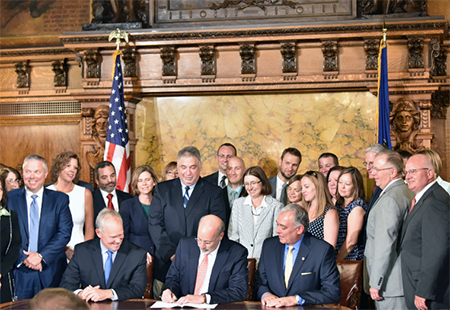 NOCTI is an exam administered in various career and tech ed fields by the National Occupancy Testing Institute.

When the NOCTI exam was introduced eight years ago, Namey noted that it was a lot like the PSSAs in that students really had no stake in it. It was just for instructors to see how students were doing.

But that started to change a couple of years ago when students who score “advanced’’ on the NOCTI began to receive articulated credits at colleges around the state. Making it an alternate path to graduation over the Keystones further stresses the importance of NOCTI for students.

Namey noted both pieces of legislation were priorities of PSEA’s Department of Career and Technical Studies.

“We in career and technical education have been blessed this past year with legislative victories that PSEA has been able to help accomplish on our behalf,’’ he said.

Another big moment cited by Namey was Wolf’s appearance last spring at SkillsUSA Pennsylvania, a sort of “state championship’’ for 1,700 of Pennsylvania’s career and tech ed students.

He said the governor’s appearance was a big show of support for career and technical education.